Well...my last challenge worked out well.  I stopped biting my nails.  I never thought I would be able to since I did try many times in the past...but here we are weeks later and I've stopped.  When I got back from DIsney, I had some Disney Jamberry Wraps waiting for me and I decided to try them...see result below :) 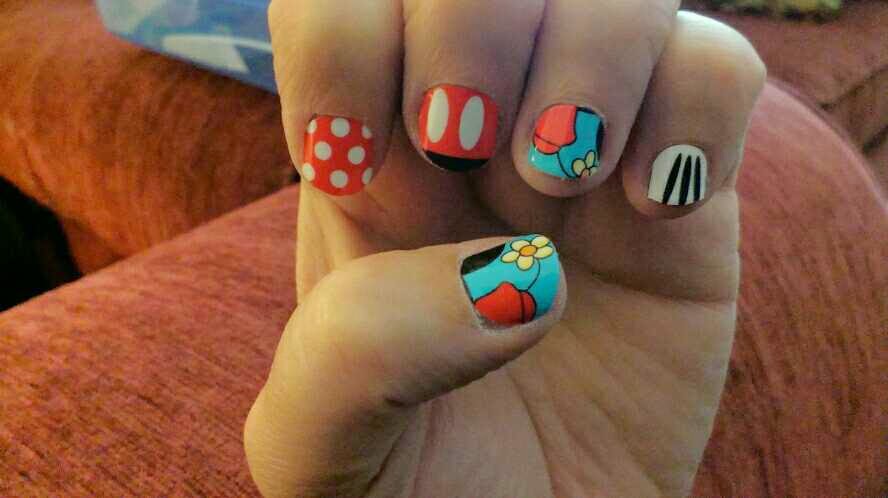 The two previous challenges have also been pretty successful.  I haven't had Pepsi/Coke (dark colas) since early March.  I haven't had any Potato Chips in a couple months either.  I sometimes miss them, but the horrible cravings have all but disappeared!!

I think those challenges combined with the insane number of steps we were walking at Disney have helped me lose 10 lbs in the last 4 months.  I'm not doing these things to lose weight...but it's a nice side effect :)

Now for my next challenge.  This one will be a tough one.  Last month, a few friends of mine were doing the "30 Day Ab Challenge".  I decided to push it a month because of my Disney Trip and there was no way I'd be doing an Ab workout every day of my trip.

So here it is.  On July 1st, I will be starting the 30 Day Ab Challenge.  It looks EXTREMELY difficult, but I'll be trying anyway.  I'm sure I'll be needing some encouragement during this one...I'm good at convincing myself OUT of things...but I have to do this one.

*Fingers crossed* that this goes well.  I'll be taking measurements to see if there's any difference at the end of the challenge.  Granted - if I eat horribly during that time, it won't be helping me much, so I'll be starting the "My Fitness Pal" app again to try to keep my calories to a normal level.

Have a fabulous Canada Day Weekend y'all :)

The day many hockey fans wait for to see who their favourite NHL team will choose to build their future on is here.

The first round will be tonight on TV and the rest of the rounds will happen tomorrow.

I've watched many drafts over the years...MANY drafts.  There were two reasons for this.

1. I wanted to see who my favourite team at the time would pick.  Those teams were the Habs from 1986 to 1992 and the Sens ever since.

2. I was always interested to see where Ottawa 67's players would be picked.

There are many draft days that I remember.

1992: The Otttawa Senators' FIRST draft year where they picked Alexei Yashin at number 2.  It was also the year three Ottawa 67's players were picked in the first 2 rounds. Curtis Bowen (22), Grant Marshall (23) and Mike Peca (40).

1987: The year Ottawa 67s player Andrew Cassels (my fave 67's at the time) was drafted by the Habs (fave team at the time).  That was an exciting year

There are others as well for various infamous reasons...but on to my favourite draft years....

The year I watched Martin Gélinas get drafted by the Los Angeles Kings 7th overall.  For those who haven't read previous blog posts, Martin was my fave NHLer for a very long time.  He was billeted by my aunt Fleurette when he played for the Hull Olympiques, and that's how I found out about him.  I saw a picture of him with my aunt in the newspaper and that was it - I started following his career instantly and didn't stop until he retired.  He was part of the famous Wayne Gretzky trade to Los Angeles back in August 1988.

I always hoped he'd get traded to Ottawa, but that unfortunately never happened. :(  My only Gelinas jersey is a Vancouver Canucks one.

Martin Gélinas - My favourite Hockey player.
The day I turned into a 12 year old girl!!

The year my all-time fave Ottawa Senators player and all-time fave NHLer, Chris Phillips was drafted first overall.  I absolutely do remember watching that draft and thinking the Sens had made a great choice.  I didn't know that much about Chris at the time, but there was something that I liked about that 18 year old kid.   He quickly became my fave Ottawa Sens player.  I now have 4 jerseys with his name on the back (one of them is game-worn).  I can say that he and his wife Erin are truly amazing people.  Always so nice to talk to.  I've met Chris multiple times and he's always been great - even though I was probably making a fool of myself once or twice - or EVERY time :). 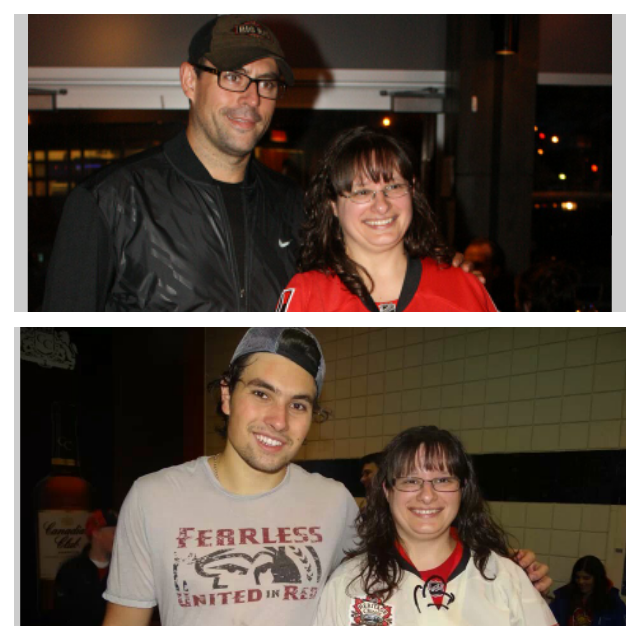 The year the Ottawa Senators drafted Cody Ceci from the Ottawa 67's 15th overall..  I knew Cody was getting drafted that year and was hoping the Sens would take him.  I kept seeing pictures of him on the ice with Mike Fisher when he was a child.  The picture was taken during the Sens Skills Competition day.   It really was something exciting to watch happen when he was drafted.  It's an amazing thing to watch, really it is.

Now...you may be wondering why this was one of my absolute favourite draft years along with the above-mentioned two. Well, I know that Chris Phillips will be retiring sometime.  The guy can't play til he's 50 after all...so for years I've been trying to see who would be my next fave Ottawa Senators / NHL player.  I love all my Sens players...but there was no one that I felt could follow after Chris retires.

This past season, when Cody was called up for a game, I was lucky enough to have been given tickets to the 100 level in the Sens end.  As soon as Cody came on the ice, I just knew that I had found my next fave.  I can't tell you why or exactly how I knew, I just did.  My bestie commented on it during the game as I was paying attention to Cody every time he was on the ice and almost ignoring Chris (they were on the same pairing).  Ever since that day, Cody's been my second fave Sens player. :)

I already bought a jersey with his name on the back, the Heritage Classic one.  He autographed it that same night and I got to get my picture taken with him as well. (Thank you to his mom Karen for setting that up)  Looking forward to watching hm for many years to come.

Now, tonight I'll be watching the draft, not only to see who drafts who, but to see if the Senators will be trading away their captain Jason Spezza for a first round pick (and more I hope).  I don't want it to happen, but it's extremely possible that it does.

In any case, it's always fun to watch these 18 year olds get drafted and seeing the joy on their faces as they pull on the jersey of the team they're possibly going to be playing for in the future.

Well...it's been 1 whole entire week since I decided to stop biting my nails. 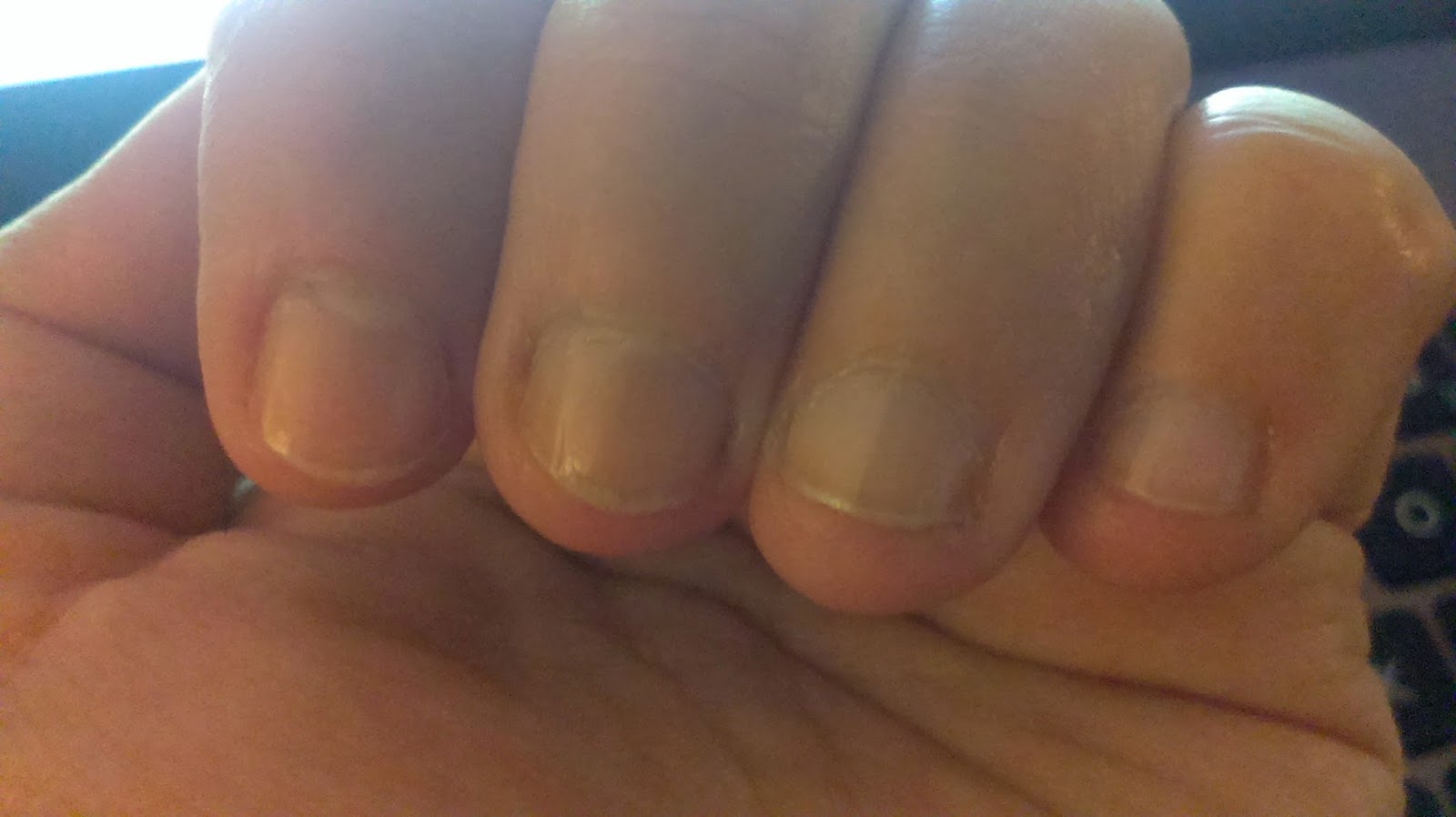 Here are the results so far...Been told that's not too bad considering just how bad it was before.

I hope I'm able to keep it up, since it obviously isn't the first time I tried this.  It hasn't been too hard...yet.  We'll see if that's the case the rest of the way.  Maybe eventually it won't even be an issue anymore. :)

Have a great day!!

A lot of you already know that soon, I leave Ottawa and head to Orlando and Walt Disney World.  I am a HUGE fan of anything and everything Disney!!

My Bestie and I are going to be celebrating our turning a certain age over the past year.

We've both been there multiple times, but I have to say that for me, it's the first time I go without any kids with me.  It's going to be a whole different experience, that's for sure.  No standing in line for autographs...unless we want to ;).  No going on the "kiddie rides"...although...really, even the kiddie rides are good ;)

It's going to be a relaxing 10 days.  Can't wait to visit all the parks, eat at some great restaurants...do all the rides - except for a few I refuse to go on...and just have a grand ol' time.

More to come after my trip :)