I was sitting at home, late evening, on my computer, going through pictures of Chris Phillips' 1000th game and the celebration when I got a phone call from my sister.

She told me my grandmother, dad's mom, was taken to the hospital and my dad was going to meet her.  My mom was waiting for my aunt and uncle to pick her up to take her to the hospital too.  I think I knew at that time it wasn't going to turn out well.

I went to my sister's house to wait for news with her.  I really didn't want to be alone and being with family is the best thing at times like this.

It really didn't take too long, an hour maybe, and my mom called us to tell us the bad news.  My grandmother had died.

I swear, everything just stopped in that instant.  I'd never lost someone close to me before and didn't know how to react, feel, what to do.

I stayed with my sister for a little while, not sure if we even spoke. She wondered how to tell her daughters that they'd never see grand-mère again.

I eventually went home and just thought of my grandmother and everything she meant to me and how much I was going to miss her.

The next few days were pretty much a blur.  Spent lots of time with family at home, the funeral home and church.  It was all so surreal.   I thank everyone that offered us support during those difficult days.  If I never told you, thank you. 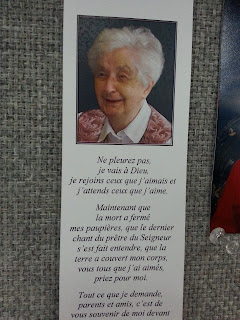 Now a year later, I still can't grasp that it happened and just how quickly.  I'd seen her not long before and she seemed fine to me.  Nothing out of the ordinary.  She asked me when I was going to find someone and get married.  She wanted me to be happy.  I told her that I was happy being single and on my own.  It brings a smile to my face when I think back on that conversattion.

I talk to her sometimes and I know she's watching over us.  I'm sure she was silently supporting my dad during his recent battle with prostate cancer.  I wish my nieces and nephew would have had more time with her.  I have so many great memories of her.  She showed me to make "Pudding Chomeur" when I was younger and I made it this year thinking of her.

I will never forget all the good times I had with her.  All the clothes she made us, the quilts, the slippers, etc.  I still have a lot of those things at home and they have even more meaning now.

They say (who's "they" anyway) that the first year is the hardest.  I do believe that, but I'm not sure how it can really truly get "easier".

I know she joined my grandfather after many years without him and they're both looking out over the family.  Two wonderful Angels!

One year ago today, February 10th, I had the opportunity to meet my favorite hockey player.  Chris Phillips.

I've been a fan of Chris' since he was drafted by the Ottawa Senators in 1996.

During his first season with the Senators in 1997-1998, he became one of my favorites along withWade Redden.  Within his first 2 season, he surpassed Wade as my favorite Ottawa Senator player and quickly eclipsed Martin Gélinas as my all time favorite NHLer.  For those who know me, that's pretty big!

Over the years, I've been able to have him sign 2 jerseys that I have bought with his name on the back.  The first time, he was surprised that I had his name on the jersey and the next time, he thanked me for it.  You'd think that I would have actually talked to him during one of those two times, but you'd be terribly wrong.

I'm an insanely shy person and have trouble articulating any kind of thought under normal circumstances, then throw in the fact that he's my fave and that just makes me unable to formulate a complete sentence.  Heck, I probably could barely say hi.

I've had the opportunity and pleasure of meeting and talking to his wife Erin on multiple occasions prior to my meeting Chris and she's always been very warm and gracious towards her husband's crazy fan.  She'd help me buy some of the charity autographed items (trying to find Chris' for me).  She's never made me feel uncomfortable.

On this day last year, it was the unveiling of a timeline in the 100 level concourse of ScotiaBank Place of Chris' 1000 game career with the Ottawa Senators.  He'd played his 1000th game the night before.  How did I get myself invited to this event?  It's all thanks to the Senators' PA Announcer, Stuntman Stu.

I'd been emailing/tweeting Stuntman Stu for years while he hosted various radio shows in Ottawa.  I'd also had the opportunity to meet him before several Ottawa Senators games as I'm a season ticket holder.  On the day following Chris' 1000th game, I wrote Stu an email telling him just how happy I was for Chris and how proud I was to be a fan.  Chris scored 2 goals on the previous night.

I wish I still had this email because I'd like to see what I wrote.  I'm sure it was gushing and unbecoming of a 38 year old, but who really cares.  Something in the email made him send it to Cyril Leeder, President of the Ottawa Senators and that is how I got the invite.

I hurried out of work and went to print out a picture I took the night before to get it autographed.  I met Stu at the arena and off we went to the unveiling.

Erin was first to come over and say hi and she was followed by Chris.  Stu introduced me and to be honest, at this point, I'm sure I said NOTHING!!!  Yes, that's right...nothing.  My brain froze and I must have looked like an idiot really.  Chris was so nice and signed my picture and then Stu took my camera to take a picture of us. 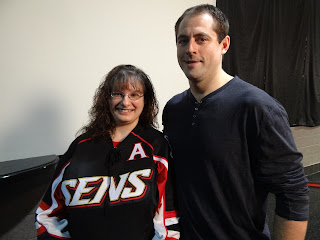 I might have managed to say hi and thank you, but I'm pretty sure that was all I said.  Despite that, it was a great experience and to be part of an event like that was amazing.

I made up for it a little bit a couple weeks later at an autograph signing where I forced myself to say more.  What exactly I said then?  I'm not really sure, but it was full of babbling, especially after he actually recognized me and said my name. 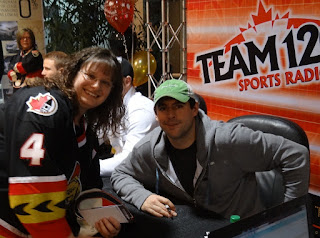 He now recognizes me and says hi when he sees me, mostly at his restaurant Big Rig.  I'll never forget this day.  It was so much fun.

Thank you to Erin and Chris for being such great people!!