I wanted to wait a couple of days before I wrote this post because I wasn’t sure how I’d truly feel, but now that the season has started…

I’m so happy about it.   I watched the Sens game on Saturday vs Winnipeg and went to their home opener on Monday!  I wore my Chris Phillips jersey to work as I always do on home game nights.  There were some negative comments, but mostly they were positive!!

When I walked into ScotiaBank Place that night, even before the gates opened, it was like coming back home.

That might sound odd but I’ve had season tickets for 12+ years now and spend a lot of time at the rink, but, other than a concert a few months ago and a Season seat holder event last week, I hadn’t been in the building since April.

I got my ticket scanned by the same person who’s been doing it for years.  The same people were standing at the gate selling the 50/50 tickets.  I loved it!

I walked around the lower concourse a few times and absorbed the atmosphere.  There was excitement all around.  I saw Cyril Leeder and he looked really happy to have the season start again.  I also saw and spoke to our PA announcer, Stuntman Stu.   It was all just very familiar.

I went up to the upper concourse where my seats are located and saw some other familiar faces.  The same people were working in the concession stand behind my section when I went to buy my food.  They were happy to be there.

I walked through the tunnel to go to my section and felt the same excitement I always have on season opening night.  When I got to the end and saw the ice and the HD scoreboard, it struck me just how much I had missed it and was looking forward to this day 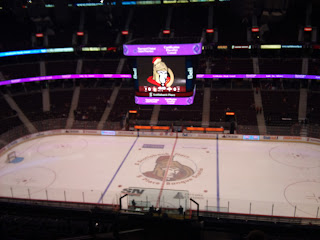 I walked up to my seats where some of the “old guard” were already sitting.  All season ticket holders I’ve gotten to know in the past few years, but hadn’t seen in months.  It was a family reunion of sorts.  Contrary to what people believed, they were all excited about the game and upcoming season.

The anticipation grew as the time to puck drop got closer.  I looked around and saw the crowd getting larger and larger.  There were so many fans, just happy to be back; so many children looking forward to seeing their idols again.

The HD scoreboard had multiple montages showing highlights of the past seasons which served to make us even more excited than we already were.  Then it started….

Stuntman Stu started announcing our 2012-2013 Ottawa Senators team one player at a time.  The biggest cheers and ovation of course reserved for our captain, Daniel Alfredsson.  I got chills I tell you.  I cheered extra loud for Phillips, as I always do.

There was a ceremonial puck drop featuring our Owner, Eugene Melnyk and a double lung transplant recipient, Hélène Campbell.  She is such an inspiration to many out there.

We were then treated to Lyndon Slewidge singing the American and Canadian national anthems.  Sens fans know who he is.  Again, I got chills.  On a side note, I did not recognize him without his hat.

Then the moment we were all waiting for, the actual puck drop and start of the game.

It certainly didn’t take long for the crowd to get into the game.  They were cheering for the saves and the goals.  They jeered ex-Sens players on the Panthers team and they complained about Jason Spezza…one part I had almost forgotten about.  For the record, I’m not one of those complainers, I happen to love Jason.

The music was great and Stuntman Stu was on his game, not showing any rust after an 8 month break from PA announcing.

All in all, I left the arena after the game and couldn’t have been happier.  It does help that the Sens won, but the whole experience was fantastic.

I guess no matter how mad I was at the situation, I still love hockey and the Ottawa Senators and I don’t really think that will ever change.

Yesterday I wrote about wanting to learn how to crochet this year and hopefully be able to make myself an afghan.

I was derailed a little last night when I decided that I was doing something else.

About a month ago I bought a "ruffle scarf".  I'm sure you've all seen them in all kinds of different colors.  For the past week I've been looking for my scarf but haven't been able to find it anywhere..  Instead of going out and buying another one, I decided that it might be good to learn how to make it.

So, yesterday I went on YouTube and found a video showing you how to knit the scarf using special yarn.  I had already bought this yarn a while ago but hadn't gotten around to trying to use it.  I thought it would be difficult and take me a while to get it completed.

After about 4 hours of knitting, here is my new scarf.  It's around 5 feet in length and oh so cute.  It really wasn't hard to knit either once I got the hang of it. 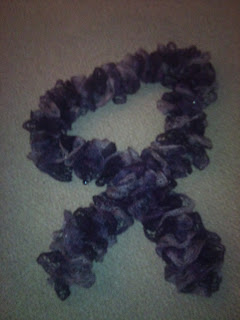 I'm really very proud of myself.  I actually finished a knitting project which I had never done before.  I'd started many, but never go around to finishing any of them.  (mostly doll blankets as my knitting skills are about as limited as my crochet skills)

Maybe I'll make some for my family and friends.  Any request?? ;)

Now that I have my ruffle scarf, I will go back to learning how to crochet.

See you all next time


I read a blog post by Gail Vaz-Oxlade the other day about how she taught herself to knit one day to keep herself busy and to keep her brain active.  I decided that I would do the same thing.


My new project is crochet.  I learned how to about 30 years ago in grade school and we made an octopus.  That was my one and only crochet project and it was for 2 months when I was 9.  Needless to say, I was not an expert when I stopped and so I was starting as if I’d never done it before.

Last night, I went to Walmart and bought a nice little “How to crochet” kit and some yarn.  When I got home, I managed to crochet a square by using a simple “Single crochet stitch”.  It’s an odd looking square because I wasn’t counting the stitches and actually dropped some, but that’s ok.  As a newbie on the first night, I don’t think I did too badly. 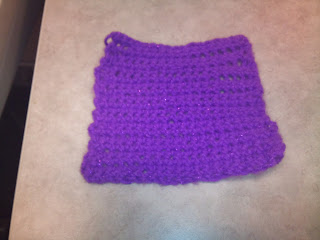 For the rest of this year, I will be teaching myself how to crochet.  My book and youtube are wonderful learning tools.

I’d love to crochet myself an afghan by the end of the year, but maybe a should start off smaller, like a scarf or dishrags ;).

In the meantime, I’ll continue making little squares with the different stitches I will be learning and then I’ll learn to read a crochet a pattern.  Then I’ll consider the afghan.

All this from going on a financial advice site.

You never where you will find inspiration.

I’ll keep you posted on my progress