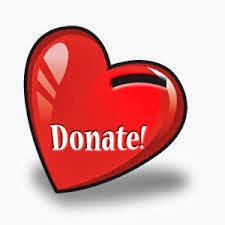 As some may know - for the past couple of years, I've been making a donation to a charity on my birthday.  I would count all the birthday wishes I would get on Twitter and Facebook and would then decide the amount of $$ depending on the number of wishes I got.

In 2010 it was a donation to buy some Lee DeWyze CDs for children stuck in the hospital over Christmas time.  It was a HIT!!!

In 2011, I made a donation for pancreatic cancer research.

In 2012 it was much more personal.  I made a donation towards prostate cancer research in honor of my father who had just been diagnosed with it.  I am happy to say that treatment has worked and he is doing well.

This year, I turn 40 on October 6th.  I decided to add a little  something different.

I will make a personal donation in my usual way - that is counting all my tweets and facebook birthday wishes and I will donate for every wish I get.  Also, if I get celebrity / semi-celebrity birthday tweets - I will also give a larger amount. ;)   AHEM Chris Phillips, Lee DeWyze and others :)

On top of that, I'm also having a small get together with friends for my birthday at Big Rig Kitchen and Brewery and I have asked the guests to bring a donation for Candlelighters.  They work to provide different support programs for families struck by childhood cancers.  This is such a FANTASTIC and IMPORTANT organization.  I know of families who have used their services and it's so appreciated.  Please visit their website for more information on what they do and all their different programs.

I hope you all will help me break my bank account on October 6th. :)

Thank you for your support :) 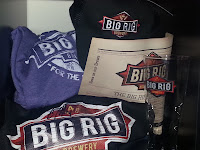 For those who know me, the fact that my fave place to eat / hang out at is Big Rig Kitchen and Brewery is probably not a surprise at all.  There are many reasons for this - but let's be honest here for a second.

The fact that my favourite Ottawa Senators player, Chris Phillips, is part owner and the restaurant is also named after him did help at the beginning.

When I first heard that he was opening a restaurant, I was really looking forward to going.  I was going to go eat there whether it was good or bad just to support his project.

Of course - it turns out that it isn't bad at all.  It is actually great in my humble opinion.

I've been going to the restaurant fairly regularly since it opened on June 12th 2012.  I was there the first week and yes, there were a few hiccups, but  I have to say that every time I've been since the opening, the food and service have only gotten better and better.

I like to make an appearance during the hockey season to watch hockey games or to eat before a Sens hockey game.  The decor, especially on the bar side of the establishment is very much geared towards the Sens - specifically, Chris Phillips.  My faves are a framed #4 Sens jersey, with the name Big Rig on the back, and a print of a painting Chris received for his 1000th game in February 2012.

I've also been known to head there after work to pick up some food to take home.  I've brought many friends and family to experience Big Rig and they've mostly left impressed and quite a few have become regulars themselves.  You can't please everyone, but it seems like the management at Big Rig tries and I absolutely love that.

They aren't just a restaurant, they also have an in-house brewery where their brewmaster Lon Laddell  makes, what I'm told are pretty amazing beers.  I can't say that I've tasted any of them since I'm allergic to alcohol, but I've heard so many great things from my beer drinking friends.

They brew their regular types of beer and also make some seasonal ones.  See their brewery site for more details and a list of beers -  Brewery Site

The brewery is visible from the restaurant and one day I'd like to take a tour.  I wish I could say more about this part of the restaurant, but my experience is extremely limited.

Now for what I do know, the restaurant.  I am a pretty picky eater, but the food has won me over.  I tend to stick with what I know - but I am able to have more than just one or two items from the menu.  The portions are large (there is no chance you will leave still hungry). 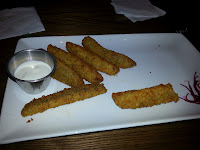 I am absolutely addicted to their deep fried pickles.  Sounds odd, but TRUST me, you must have some.  I've converted many people. ;)  I also really love their spicy maple chicken wings.  Just the right amount of seasonings.  I've recently had the pleasure of tasting some fantastic ribs at their 1 year anniversary and I have to say - some of the best ribs I've ever had.  I only wish they were available on the daily menu as I'd have that every single time I go - with a side of fried pickles of course. ;)

Other than that, they have a very varied menu and you can find something for everyone.  Their pizza is extremely popular as is their smoked meat sandwich.  Try one or both, you won't regret it. 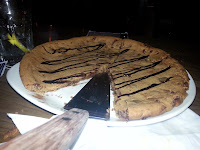 If you sign up to their birthday club and go on your birthday month with 5 friends, you will get to enjoy a free birthday cookie as well as other perks.  Do not miss out on this warm ooey gooey chocolate chip cookie.  It is SINFUL and the size of a dinner plate!!!  I've ordered it for dessert just so I can have leftovers to eat at home the next couple of days...it's THAT good.

On to the staff.  It really shows that effort has been put in to finding just the right people for the various jobs.  I have not yet had any issues with anyone.  You walk into the restaurant and are greeted but an always smiling employee who will remember you if you've been there before (I might have a problem ;)).  There is someone working the takeout counter / store, where you can buy some Big Rig merchandise - again, they will remember you and your regular order if you go often enough - or maybe it's just me (Again, I have a problem ;)).  Once you're seated, your server will take your drink order and a few minutes later, someone else will be dropping it off to your table.  I've always had servers that are courteous and extremely helpful.  I've only had limited experience with the bar staff, but from what I can see, there are no complaints in that area either.

You will also notice that upper management is very visible and they will do whatever they can to help out and address any concerns. If you're lucky, you might be able to meet some of the partners and maybe even Chris Phillips himself.  Yes, I have seen him there a few times.  You might even see some Ottawa Senators players as well as local celebrities and they're always so nice.

I've had the pleasure of meeting a good number of the partners/managers and they are all fantastic and willing to go the extra mile.

They are also very visible on social media and that's very important now.  They haven't shied away from Twitter or Facebook and take advantage of both platforms.  I've found out about lots of events and specials just from following them and you can sometimes get some perks from this.

They have a fan for life in me - now if only they could open a location in the East end of the city ;)

Go experience it yourself and let me know how you like it. 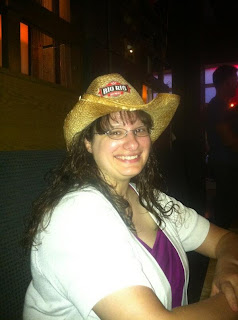