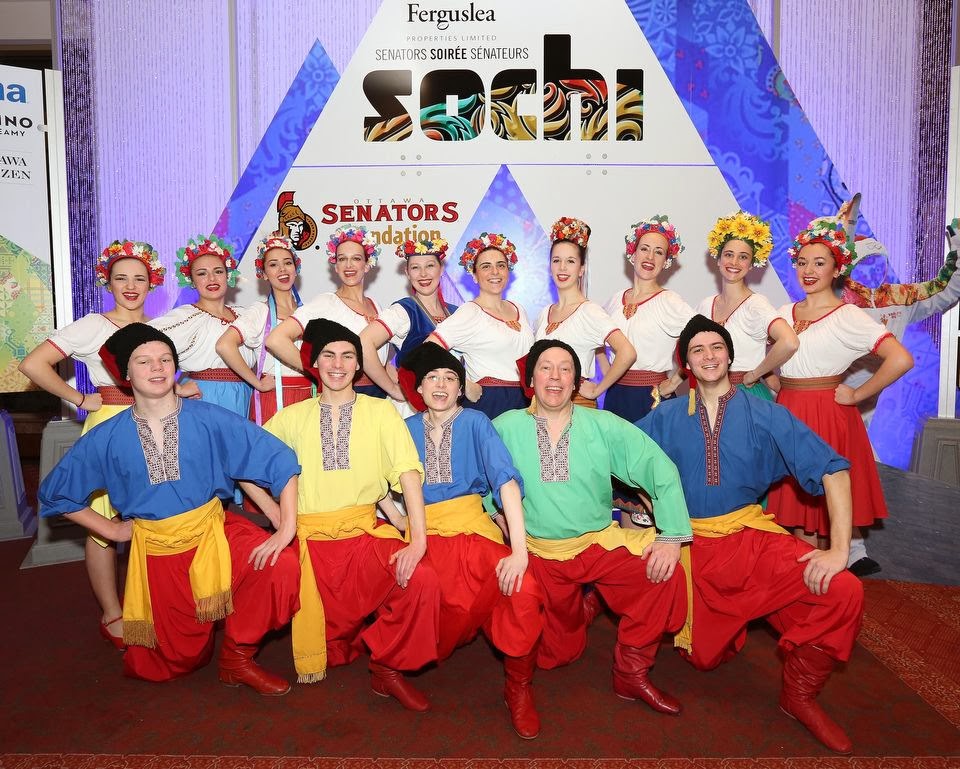 Last night - January 25th, 2014, the Ottawa Senators Foundation had a fantastic event,  the 2014 Ferguslea Sens Soiree.  This event is held every year and is attended by all the Ottawa Senators players as well as management etc.  It's always a great success in Ottawa. This year's theme was Sochi.

I've never had the opportunity to attend this event - but I always look forward to seeing the pictures / videos in the days after.  It seems like great fun and one day - when I win the lottery - I'll be able to attend myself.

What I would like to say about the 2014 Sens Soirée is that I am so incredibly proud to live in Ottawa and to be an Ottawa Senators fan.

This year's event raised $327,500 for children and youth.  I believe this is a record amount.  If I'm wrong - feel free to correct me.

There is usually a silent and live auction throughout the night.  There are always some great prizes offered like this painting by local artist Tony Harris (@THFineArt).  I believe it raised 12k.  Wow!! Amazing and a GREAT painting :)

Now on to the original reason for this post and also one of the reasons I truly need lots of disposable income (ie The Lottery).

At one point during the live auction - it appears that some of the Ottawa Senators players were being auctioned off - more like a meal prepared by them at the winning bidder's house.

Now - I really wish I had been there so that I could tell you the sequence of events - but maybe one of my friends that was there will be able to help me.

From various Twitter pictures I've seen - it started off with Zack Smith, joined by Clarke MacArthur, Kyle Turris, Bobby Ryan, Marc Methot, Erik Karlsson and Joe Corvo.  I don't know the order they all decided to participate, nor do I know if this was an impromptu addition to the live auction, but the final total for this auction item alone was 50k.  Yes...that's  50 THOUSAND DOLLARS!!!!  Holy Moly!!!  How do I get myself invited to that meal???

Best part - from what I'm told - was when Joe Corvo showed up on the stage...shirtless.  See the picture for the proof.  It apparently made the amount jump by 15K.  Hey - it's for the kids right?? :)

As an added bonus - Chris Phillips and his wife Erin are supplying the beer.  If you don't know, Chris is an owner of the Big Rig Kitchen and Brewery....oh and my Absolute Fave Hockey Player :)

I'm so very proud of everyone in this city.  The generosity is amazing and I couldn't be more proud if I tried.

Now who's got the winning numbers for next week's lotto 6/49 so that I can go to next year's Sens Soiree...and with any luck, there will be another prize from the Ottawa Senators Players themselves.  :)

Hockey players - They're human beings - not robots - My opinion. 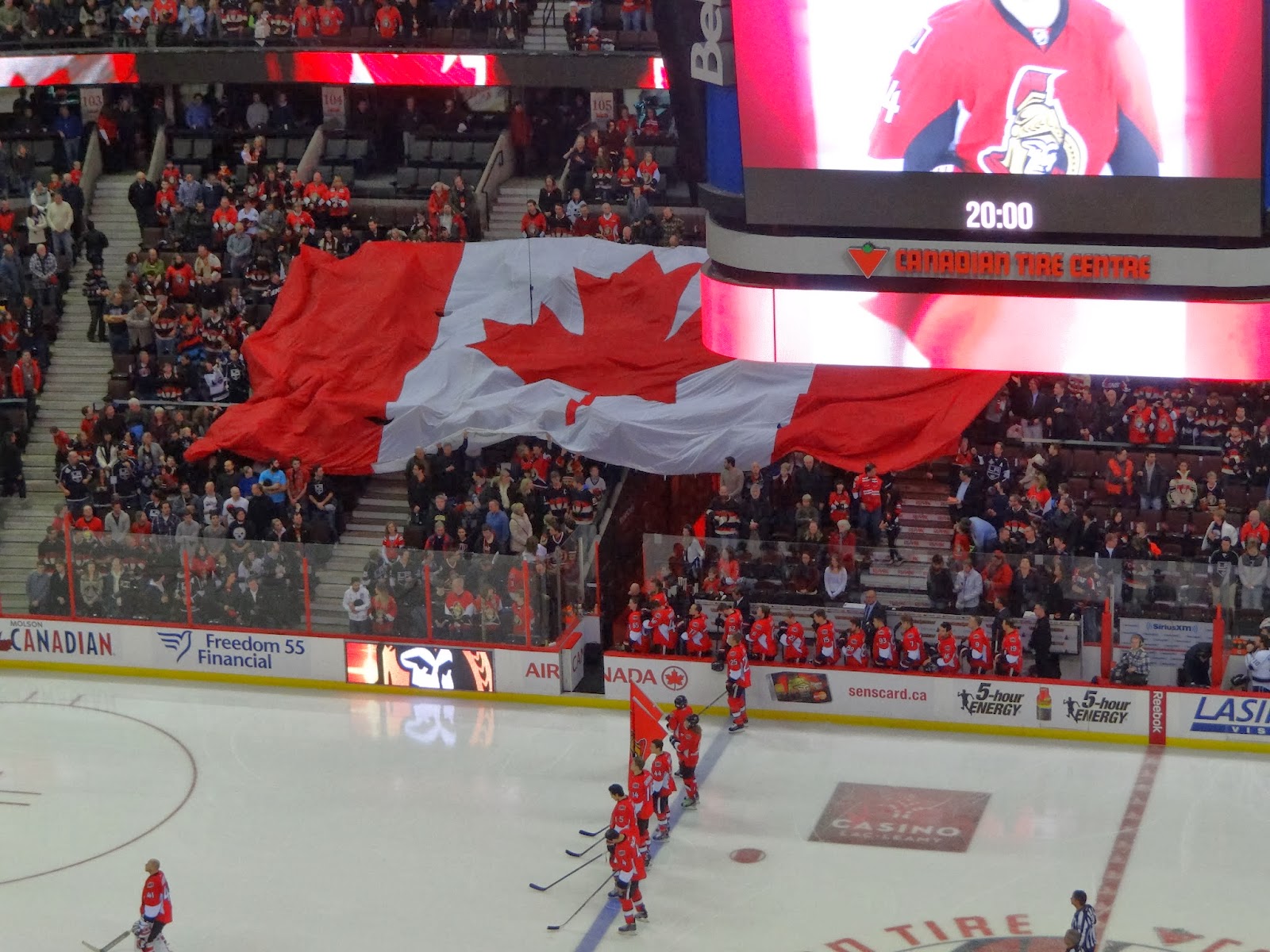 I've been a hockey fan for the better part of my life.  When I was a child, I HATED hockey and slowly grew to love it.  This is mostly due to the fact that my dad would take me to see Ottawa 67's hockey games when I was young.  Spending time with my dad somehow grew my love for the sport.

I would cut out every picture / article from newpapers and magazines on both the 67's and the Montreal Canadiens (before the Sens came back in 1992).  I would have posters all over my room.  I LOVED everything about hockey.  Yes, there was a short amount of time in my teens when it was all about the cute boys - but even back then, I LOVED the game of hockey.

I'm 40 now and all *ahem* grown up *ahem*  At some point, reality sets in and the hero-worship tends to disappear.

They become human again instead of these heroes that you once looked up to.

What I want to understand is how adults in today's world seem to expect so much more out of these people than they would ever expect out of themselves.  They want perfection.  If a player makes a bad pass - trade him.  If a player doesn't stop the puck - Oh he's done, should've kept the other guy.  If a player has a few bad games - He should retire or get rid of him.  My personal favourite - He makes way too much money, get rid of him. There is no room for error.  It always seems to be all or nothing.

Come on people, these guys are human beings.  Just like you and I, they have good days and bad days.  They make good and bad decisions.  There are a few big differences.

1) Most of our decisions aren't made in split seconds, you have time to weigh the pros and cons, even in our work environments.  These hockey players on the other hand do not have THAT much time when they're on the ice during a hockey game.

2) They are being watched and judged by millions of people every time they step on to the ice.  How would you like it if that was what you had to deal with on a daily basis?

Sure, they CHOSE to play hockey and they make a ton more money than most of us, but that doesn't make them any different than you and I where it counts.  They have responsibilities, families, bills to pay and hey - they have feelings and emotions too.  Sometimes outside influences can and will affect their performance on the ice.

Watching so-called fans of a team/player suddenly start attacking these people personally, or in ways that are entirely uncalled for, boggles my mind.  Sure, you want to criticize their play on the ice or their hockey decisions?  That's fair.  Go ahead, do what you want...but keep in mind that they have family members and friends on the internet as well who might read these things.  There are ways of critiquing that don't involve personal insults to them or their loved ones.

Think about it when you post...how would you feel if this was said about a member of your family and you came across it on the internet?  Or how about someone says that about you and your child finds it on the internet?  Don't you think constant negativity can have an effect on someone too?

Everyone wants hockey players to be on social media - twitter etc…but when you read what some people post to them, it’s a wonder any of them even try it.  I can't really blame the ones that stay away from it.  This is how you're trying to encourage them to join in on the "fun"?  They should just ignore the negativity you say?  Do you really think that can work all the time?

Even if you "Hate" a player, there are ways of making your feelings known other than attacking them.

I complain when a hockey player makes a bad play - but I also understand that my view of the game is WAY different than theirs.  I'm perched up in the rafters and see the ice as a whole, or I’m sitting at home watching the game on TV.  I may see things they don't and they certainly see things I don't.  I, in my infinite wisdom, will defer to them since they're the ones that have been playing the game their entire lives.

You will never see me attack them or their friends/family personally...no matter how I feel about the player in question.  There is no point and quite frankly, I was raised much better than that.

They're HUMAN BEINGS.  Just because you're jealous that they were able to follow their dream playing a sport that they LOVE and made it professionally, and are likely making more money than you'll ever see in your life, doesn't give you the right to treat them so badly.   You cannot expect perfection out of them no matter how much money they may be making.  You cannot expect them to turn their feelings off because you think they owe you something.

Criticize their play all you want - stop making personal attacks on them.  Start treating them like you would someone you know.   Have compassion for things they may be going through off or on the ice.  Try to be more realistic in your expectations.

What gives YOU the right to judge them - or discuss certain things on internet message boards.  When did privacy suddenly stop being a right?

I know a lot of you won't understand what I'm trying to say or agree with me - but it is what I think.

Ok - off my soapbox and back to hockey.

For various reasons, I took a break from blogging for a little while at the end of this year.  This really is not a surprise I'm sure since it's not the first time it's happened.  Now back at it!!

Looking back on 2013, a lot has happened - ups (mostly) and downs, curves, loops but all in all, it's been mostly good.

When I was thinking about finding a New Year's resolution - I reallized that I've never been very good at keeping them so really, what's the point.

Instead, I've decided that I will be taking better care of myself this year without putting down exactly HOW.  The past few months have seen me pretty much turning into someone I don't really recognize...at least privately.  I've let things go that I would usually not.  Things have gotten messy in my life in all departments and it's time for me to take back control.

I wasn't specifically waiting for New Year's to start doing this, I've actually been telling myself this for a good while, but finally, I believe I've realized that something HAS to get done.

It won't be easy seeing as how I've been pretty good at procrastination of all kinds lately but I will do it one small step at a time.

i'm not sure when or why it all went off the rails, and I'm pretty sure none of you are interested in those details even if I did know, but what's important is that I've realized it and I know I have to do something about it.

What a cryptic post this has been, but I know what I'm trying to say. ;)

In closing, I hope you all have a fantastic 2014 and take advantage of every minute you can.  Be kind to everyone you meet.

Life has a tendency to throw curves at you so make sure that if one is thrown your way, there will be no regrets.

Spend as much time as you can with family; Grandparents, Parents, brothers, sisters, nieces, nephews, aunts, uncles, cousins etc.   My close friends are also considered part of my family.

Straighten up your priorities.  If someone needs you, be there for them in whatever capacity you can.  Don't expect that someone else will be there instead.

At the same time , if YOU need help, ask someone.  You can't expect others to know something's wrong unless you tell them.  Accept help when it's offered.  Take care of your health (physical and mental), you can't take care of others if you're sick.

Enjoy 2014 and may it be everything you hope for.